The Program aims to support the bold ideas of creative thinkers who, unfettered by conventional wisdom and unafraid of failure, are able to think outside of the box and take decisive action in order to create something from nothing - we call them “hen” (a Japanese word meaning strange or unusual) - all while creating an environment in which even bolder ideas can flourish by bringing these innovators together.

Over the course of human history, it has always been these creative and hen thinkers who have brought about breakthrough and disruptive innovation through their willingness to take on extraordinarily ambitious technological challenges. The INNO-vation Program operates on the belief that these brilliant minds should be encouraged to think, create, and work freely, as they are the key to building a new future for the world.

Message from the Ministry of Internal Affairs and Communications

The spectacular discoveries currently being made in Information and Communications Technology (ICT) are transforming at a breakneck pace. And yet the effects of COVID-19 are being felt across the globe, overturning our everyday lifestyles and pushing us into the new normal. This new normal has in turn promoted diversification and that every person in the world has the potential to awaken an industrial or social revolution. Now is precisely the time to think about the next big stride into the future. Calling conventional knowledge into question, breaking through existing barriers, and bringing about change to the industrial structure is essential. The realization of that change is Disruptive Innovation.

In order for disruptive innovation to develop and grow, we require a bedrock on top of which the seeds of inspiration, seen as “unusual” by customary standards, can naturally grow, an environment that accommodates challenges without fear of failure and an acceptance of diversity and the value it brings. This does not mean just pushing Japan's accomplishments into the world, but rather aiming for global development from the onset.

As globally recognized, there is a need to establish an environment in which candidates can feel free to challenge themselves in creating something out of nothing. Their ability to break beyond what AI can achieve and create a new 1 from a state of 0 will open up the future, rather than relying on pre-existing solutions.

In 2014, the Ministry of Internal Affairs and Communications (hereinafter referred to as “MIC”) established the “INNO-vation” Program to brew a new challenging atmosphere and provide support towards candidates (referred to as “strange or unusual”) that could bravely move forward with their wildly peculiar and ambitious ideas to resolve the technological issues facing us today.

As we all endeavor to adjust to this new normal, we are eagerly anticipating applications from new challengers. The MIC will also continue working to find the perfect structure to support world-class changes and fast-moving revolutions in the field of ICT. Together, not only can we challenge ourselves towards something new but also towards creating a better tomorrow for our world.

*ICT stands for Information and Communication Technology, as defined and used accordingly in Japanese terminology.
*This program was launched in 2014 on the basis of the recommendations of a report from the Information and Communication Council entitled “The Desired Course of ICT Policies towards Innovation Creation” (interim report: 5 July 2013, final report: 27 June 2013). In the ensuing years, the program has been positioned as a key national strategy. In FY2021, the Basic Policies for Economic and Fiscal Management and Reform, Action Plan of the Growth Strategy, and Priority Policy Program for the Realization of a Digital Society included the program as a priority policy (all approved by cabinet decision on June 18th, 2021).

Working to further expand publicity to encourage participation from a wider variety of people. 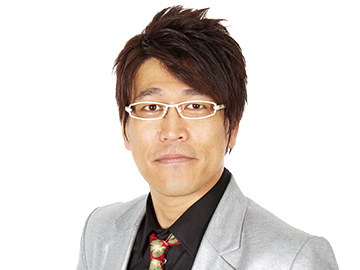 Born in Aomori, Japan in 1973.
His debut as a comedian was with 1992's “Soko Nuke AIR-LINE”.
In 2016, as the producer for Pikotaro, he provided collaborations and music with major artists in the wake of his big break, expanding his playing field to the entire world.
Currently, he is active in various fields as Kosaka Daimaou, providing commentary on news programs, appearing on variety programs and serving as an Ambassador to Ministries of Japan.

A new and powerful logo was designed to symbolize the increasingly growing embrace of this program
while retaining its Japanese origins.
We hope that our message of support for everyone's activities can be felt now more than ever before.